(BOSTON – 10/22/2021) A bill filed by State Senator Walter F. Timilty, (D-Milton) was instrumental in the creation of An Act relative to military spouse-licensure portability, education and enrollment of dependents, or SPEED Act, which passed unanimously and with bipartisan support in the Massachusetts State Senate, yesterday. This bill will support military families, who relocate to the Commonwealth, by providing career stability for the spouses of service members and ease of access to quality education for their dependents. 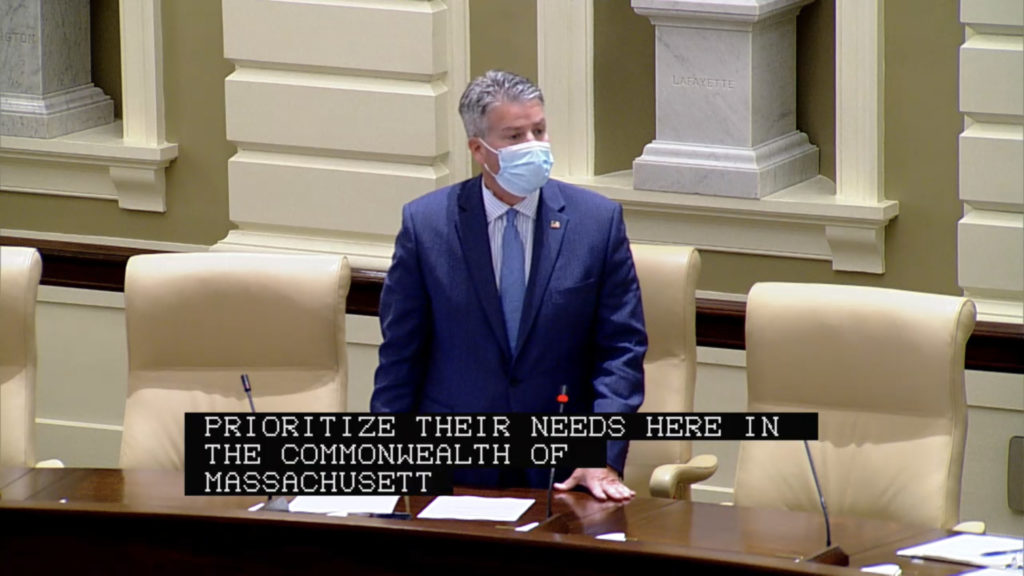 “We must do everything possible to ease transitions for military families. Today, we took an important step to let our service members know that we prioritize their needs here in the Commonwealth,” said Timilty. “This bill, quite simply, reduces hurdles for our military families coming to Massachusetts.”

“As the former Chair of the Joint Committee on Veterans and Federal Affairs, and as the current Chair of the Joint Committee on Public Safety and Homeland Security, I have enjoyed the distinct privilege of both meeting and working with members of the Commonwealth who serve in the United States Armed Forces, as well as their families. I believe that every day we must honor the dedication, service, and sacrifice of our fellow citizens who are members of the US Armed Forces,” Timilty said.

Timilty developed his bill, S.2429, through a collaboration with the Military Asset Task Force, the National Guard Association of Massachusetts, and Adjutant General Gary W. Keefe.  Timilty’s bill, S.2429, accompanied S.2502, which was reported favorably out of committee by the Joint Committee on Public Safety and Homeland Security and included in the legislation passed today.

“We appreciate and are very thankful for Senator Timilty’s work on this bill. His collaboration with his colleagues in the Massachusetts State Senate has ensured that the Commonwealth takes care of our service members,” said Amanda Tefft, President, National Guard Association of Massachusetts (NGAMA). “We appreciate the senator’s advocacy and hard work to improve the transition process faced by our military families when they are relocated to the Massachusetts.”

This legislation would speed up the professional licensure process for military spouses to ensure they can continue their careers, allow for advanced and virtual enrollment for military children to resolve disruptions in education, provide in-state tuition continuity for military-connected college students, and establish a Purple Star Campus designation to identify public schools that show a major commitment to military families.

The SPEED Act would also help Massachusetts meet criteria used by the Department of Defense and military officials when considering basing assignments and federal investments for military installations.

On average, military members receive new orders to relocate every 24-36 months. This uprooting not only affects the service member, but it also affects their entire family as well. Military spouses and children move an average of six to nine times over the course of their service member’s career. About 185,000 military children move between schools annually and miss important registration and application periods. As a result, they may have to shift their planned course of study, take courses during summer school, or even be forced to graduate later. In addition, military-connected students also face social and emotional challenges that include leaving supportive friends and activities to start over at a new school.  Frequent moving pushes many military spouses to seek out portable professions, which often require a state-issued license. The current lengthy process of reapplying for licensing can lead military families to lose a second source of income and push many service members to considering leaving the military.

Components of the SPEED Act include:

The bill now goes to the Massachusetts House of Representatives for consideration.